'Jodi is one of those people who instantly inspire you to be a better person' - Dale Barltrop, Former Concertmaster, VSO 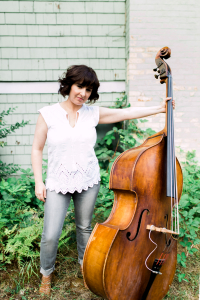 Juno-nominated bassist, composer, bandleader, and educator Jodi Proznick has earned a reputation as one of Canada’s finest jazz artists. She has won numerous National Jazz Awards, including Bassist of the Year in ’08 and ’09. Her group, the Jodi Proznick Quartet, was awarded the Acoustic Group of the Year and Album of the Year in ‘08 and the Galaxie Rising Star at the Vancouver International Jazz Festival in ‘04.

Jodi began playing bass at the age of 13 under the direction of her father David, an award-winning music educator. In ‘93, Jodi received the General Motors Award of Excellence, establishing her as one of the top young musicians at Musicfest Canada, and then went on to receive a scholarship to study bass at McGill University in Montreal. After graduating, Jodi played with many of the top musicians in Montreal, including Juno winners Christine Jensen and Renee Lee as well as Montreal greats Andre White and Greg Clayton. She was awarded the IAJE Sisters in Jazz award in ‘98 as one of the best up-and-coming female jazz musicians.

Jodi moved to Vancouver in ‘00, where she now lives with her husband and collaborator, pianist Tilden Webb, and young son Tristan. Her personal highlights include opening for Oscar Peterson in 2004, performing as a featured soloist with the Vancouver Symphony Orchestra, and recording numerous times for CBC Radio. Another highlight in Jodi’s career was when she was asked to be the featured bassist in the 2010 Vancouver Olympic Winter Games’ closing ceremonies and soundtrack.

Jodi’s deep passion for education lead her to pursue a Masters Degree in Education at Simon Fraser University. She is a faculty member at Kwantlen Polytechnic University where she teaches improvisation, jazz theory, jazz history, popular music history, rudiments, jazz combo and bass lessons. She is the Artistic Director of the VSO School of Music Summer Jazz Workshop where she also teaches jazz bass, combo and jazz theory. She has been a guest adjudicator and clinician at many festivals, colleges, universities, and conferences across Canada.

As well as an extensive background as a jazz educator, Jodi was involved in teaching early childhood music classes for over 15 years. Her methodology included a combination of Orff, Kodaly, Dalcroze, Montessori and Suzuki philosophies of music education. Her areas of interest include arts-based research, embodied educational practices, attachment, phenomenology and creativity.

She has been described as “… armed with an arsenal of talent sure to develop recognition as one of the finest bassist in the jazz world today” (Ejazznews), “… (playing with) an infectiously in-the-pocket sense of groove” (Cadence Magazine), “… a jazz bassist with great time and a rock-solid sound ” (Katie Malloch, CBC Radio), “ a great player, who plays with intoxicating passion” (RivitingRiff.com), and “a wonderful bassist who really digs in and plays from the heart” (David Fathead Newman – Coda Magazine interview).

I look forward to sharing the musical journey with you at the following institutions:

Jodi has been a guest clinician/lecturer at the following universities:

Jodi has adjudicated at the at the following music festivals and summer music programs:

Jodi has presented at the following conferences and/or professional development workshops:

“The inexpressible depth of music, so easy to understand and yet so inexplicable, is due to the fact that it reproduces all the emotions of our innermost being, but entirely without reality and remote from its pain… Music expresses only the quintessence of life and of its events, never these themselves.” ~ Oliver Sacks from Musicophelia: Tales of Music and the Brain

Everyday Inspiration: The Story of “Beautiful Again” From My New Album Sun Songs